Last Friday, the Bandai Spirits Hobby Division, via The Gundam Base Tokyo, announced the Gunpla Link Project, kits released as part of the Gunpla 40th Anniversary celebration. This probably includes the previously revealed HG RX-78-2 Gundam “Beyond Global” but three more kits were announced during the press conference… 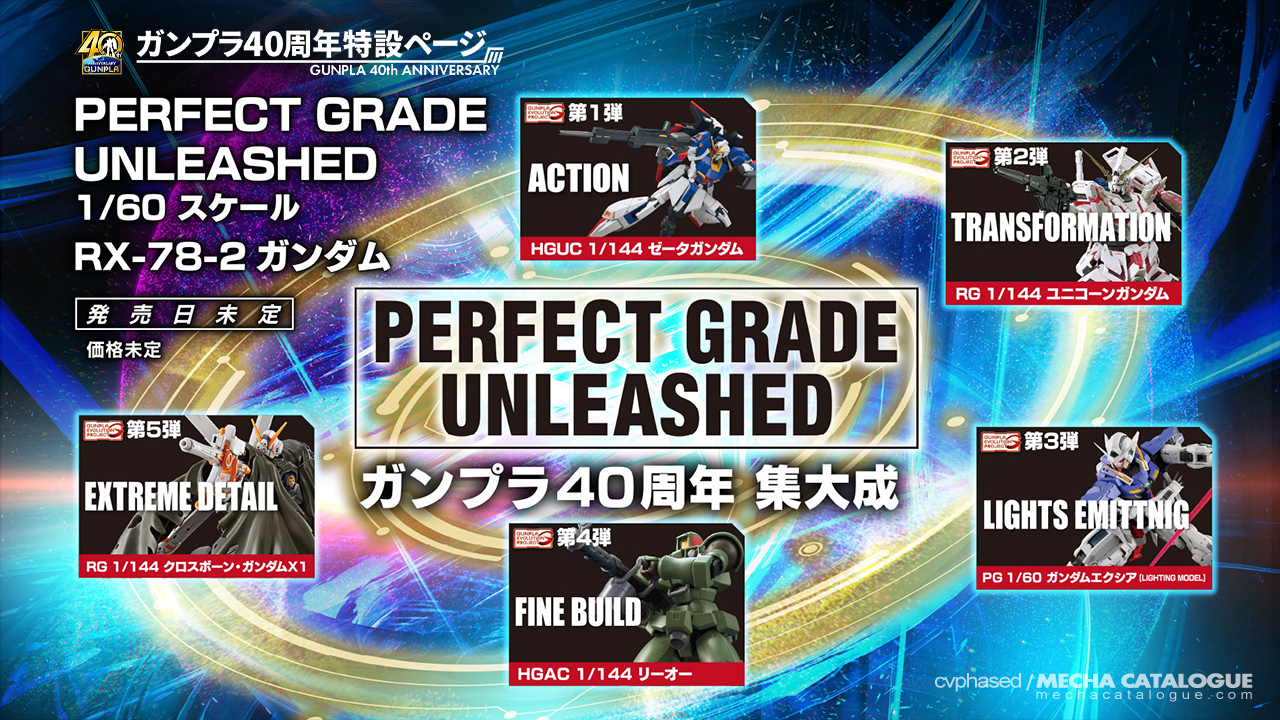 Remember the Gunpla Evolution Project where kits under this banner demonstrates a certain Evolution Point that’s key to the future of Gunpla. Well, it looks like we now have the culmination of the project, as we’re going full circle and getting a new Perfect Grade Gundam, the Perfect Grade Unleashed 1/60 RX-78-2 Gundam. They haven’t shown a full prototype although line art for the head unit has appeared during the press event, which you can search online. While I don’t collect Perfect Grade kits, I’m sure this will be a treat for those who do. Adding to the plethora of 1/144 scale RX-78-2 Gundams we got and we’ll be getting is a new kit that focuses on the materials rather than kit engineering. This is the Gundarium Alloy Model RX-78-2 Gundam which is supposedly made from a combination of titanium and aluminum. It’s not a remold or retool of an existing kit and if you look at the video I’ve attached below, the kit has a low parts count, like the 1999 First Grade kits. Though as mentioned, the focus here is the materials used. Not sure how widely available this kit would be though it is a Premium Bandai exclusive set for a July 2020 release. 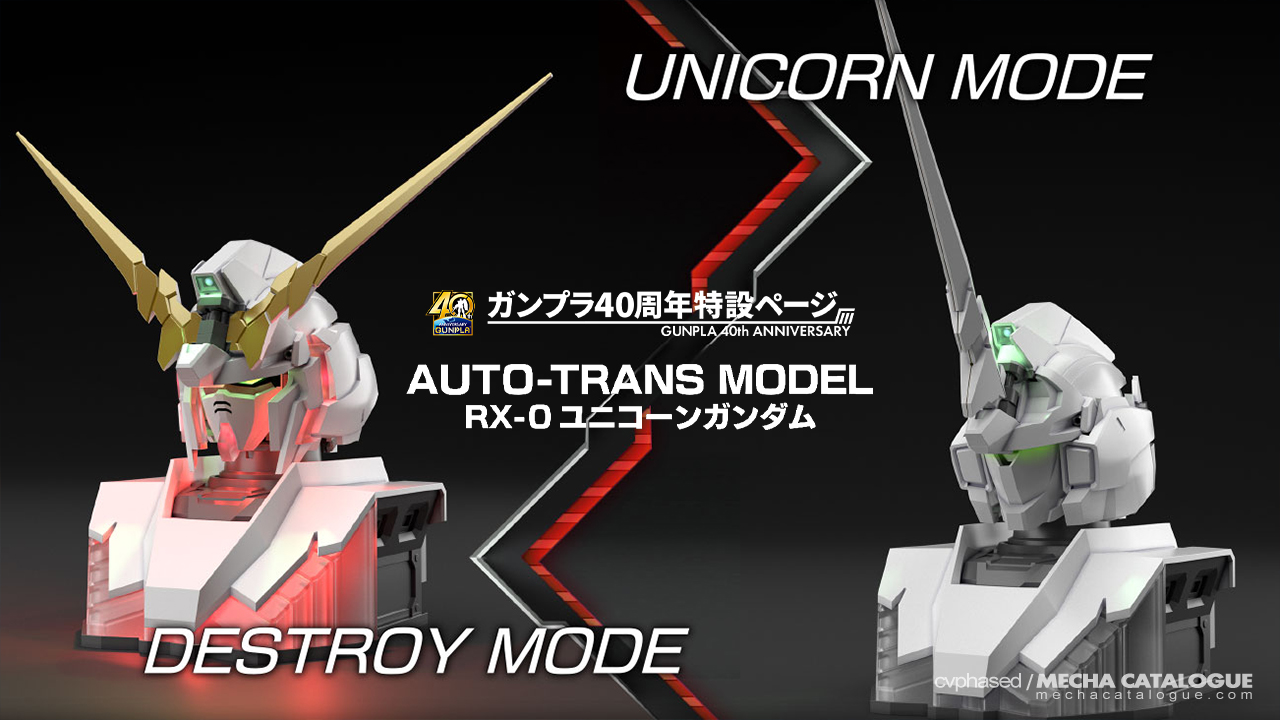 With the Unicorn Gundam being the current flagship mobile suit of the franchise, it’s no surprise that we’ll get some sort of Unicorn Gundam item as part of this project. But this is different from the usual as this is supposedly a bust that automatically transforms from Unicorn to Destroy Mode, like the life-sized one in Odaiba. It also featured LED light up features for borh the Psycho-Frame and the main optical unit. There’s no mention of scale but fans of the design should definitely look forward to getting this one. 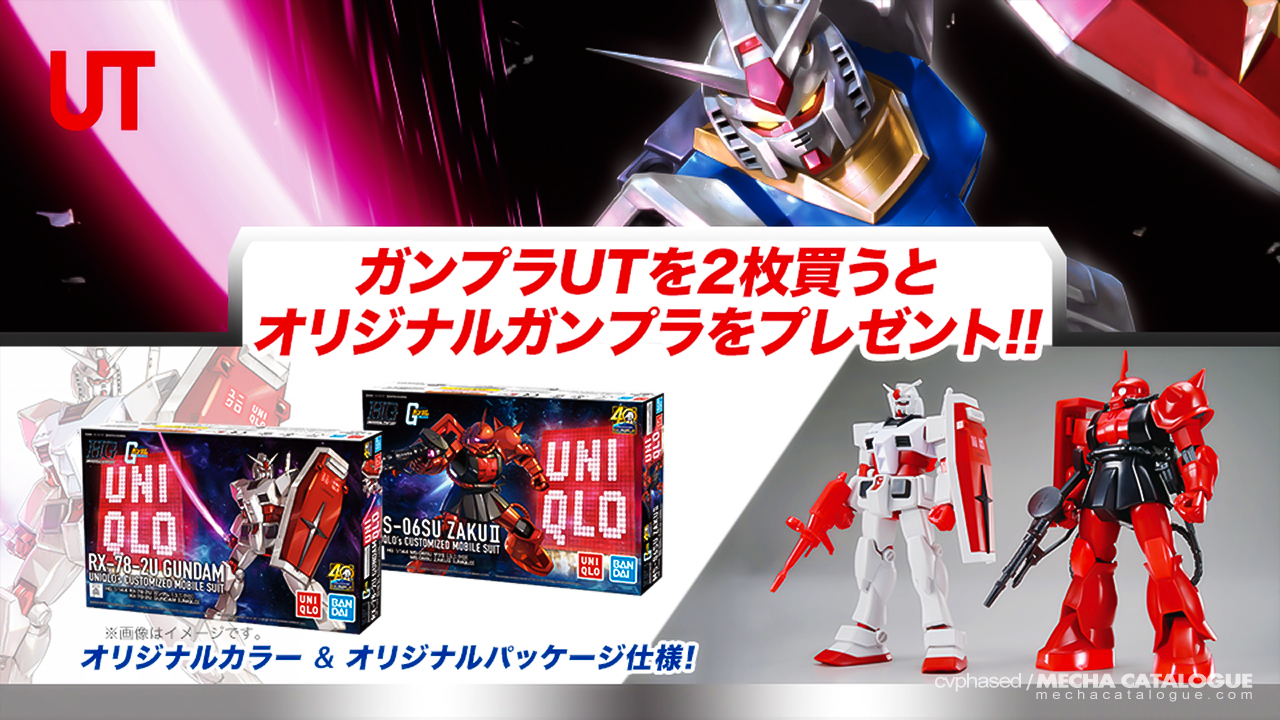 Last year, we saw a Gundam ✕ Uniqlo collaboration as part of the franchise’s 40th Anniversary. These included Gundam UT shirts, and a couple of Uniqlo-colored HGUC kits. For the Gunpla 40th Anniversary collaboration, we’re still getting more Gundam UT shirts and the same HGUC kits but with better colors. The Gundam is now dominantly white with red and black highlights whereas the Zaku is dominantly red with black highlights and a white monoeye. The kits can be purchased at Uniqlo branches in Japan and Hong Kong.