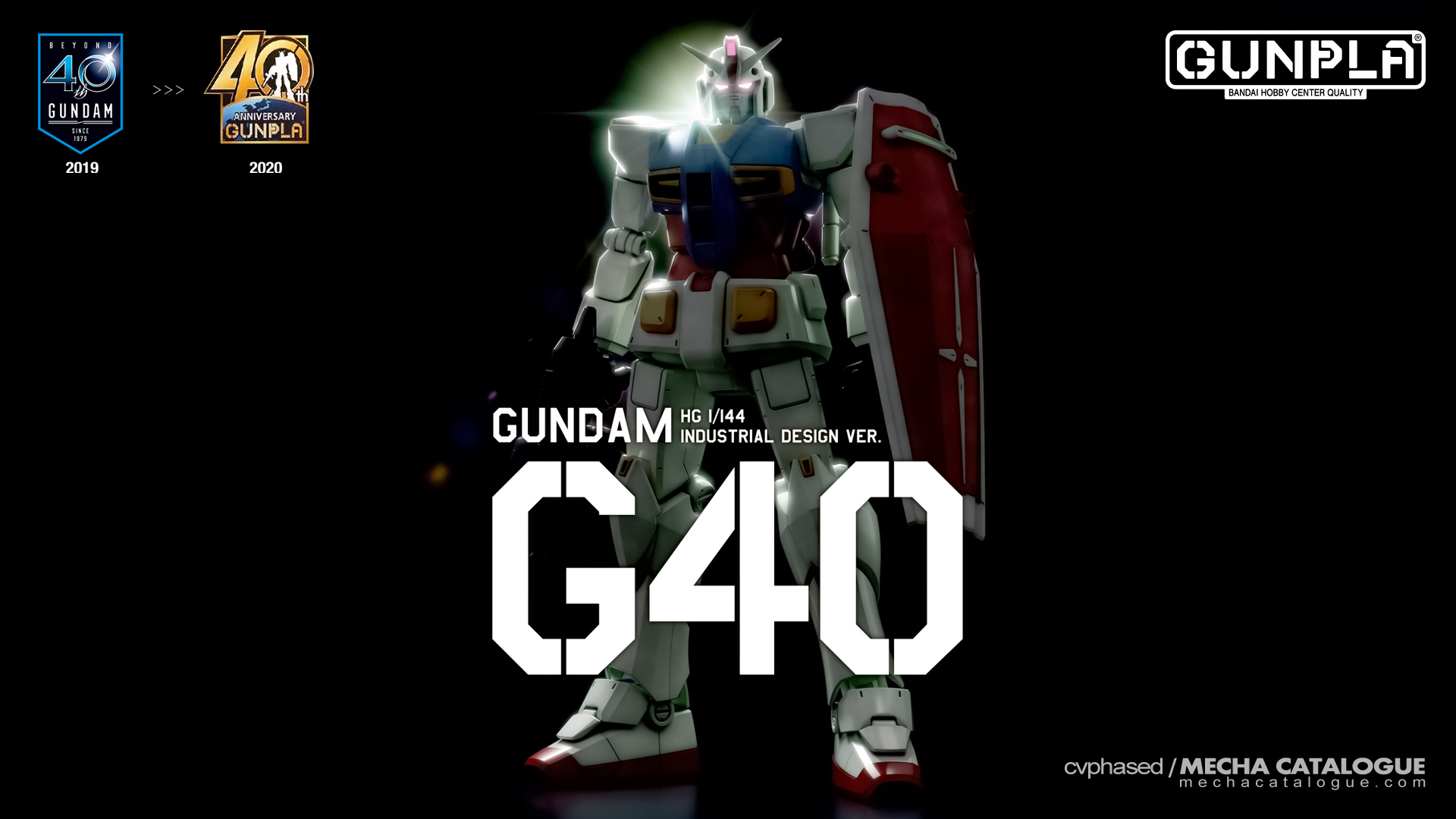 Along with this reveal, the design is now officially referred to as Gundam G40 (Industrial Design) which represents the design principles Ken Okuyama applied. So let’s take a look at what this very engineered High Grade has to offer. 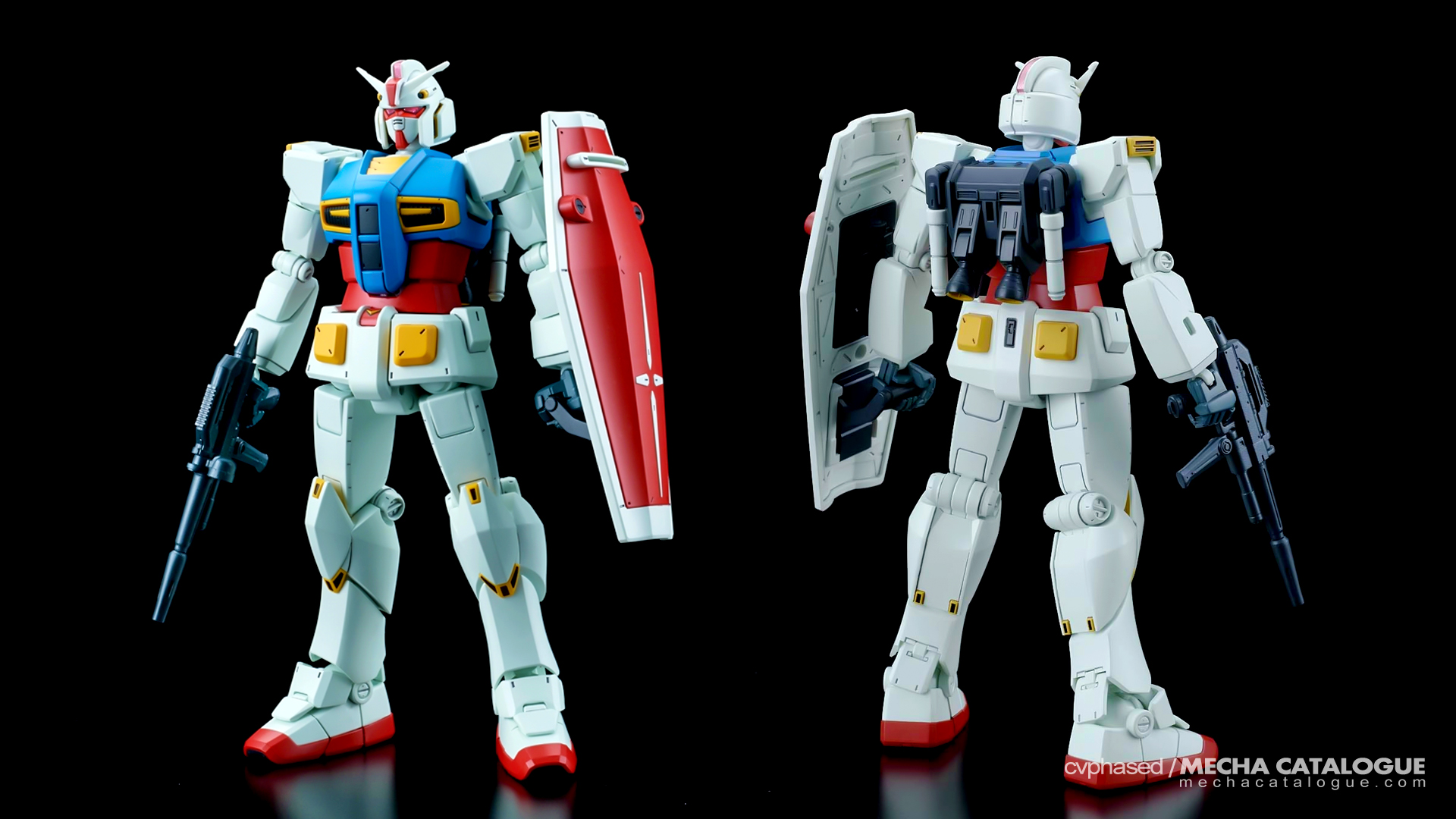 Here are good profile shots of the kit and gives a great idea of the changes that Ken Okuyama made to the vanilla RX-78-2 Gundam design. It still retains the same visual cues like the overall colors and placement of key details. That said, there are noticeable differences. Starting with the head unit, the v-fin crest isn’t the usual pentagon shape, coupled with what was previously the front camera unit and is now a linear unit that extends to the back, similar to those of the Hazel Custom. The front face plate also has additional lines surrounding the front vents.

Going to the torso unit, both the main vents and the cockpit hatches were redesigned, taking inspirations from sports car designs. The skirt armors now taper downward going from front to the back. Also noticeable is how the beam saber handles are not visible in the silhouette of the design. That’s because they are now mounted downward when not in use. Though I’d imagine these would always swivel upwards. Both shoulder armors have more side vents, the upper arms have more muscular-looking curves, and the forearms are not the straight rectangular blocks they were before. 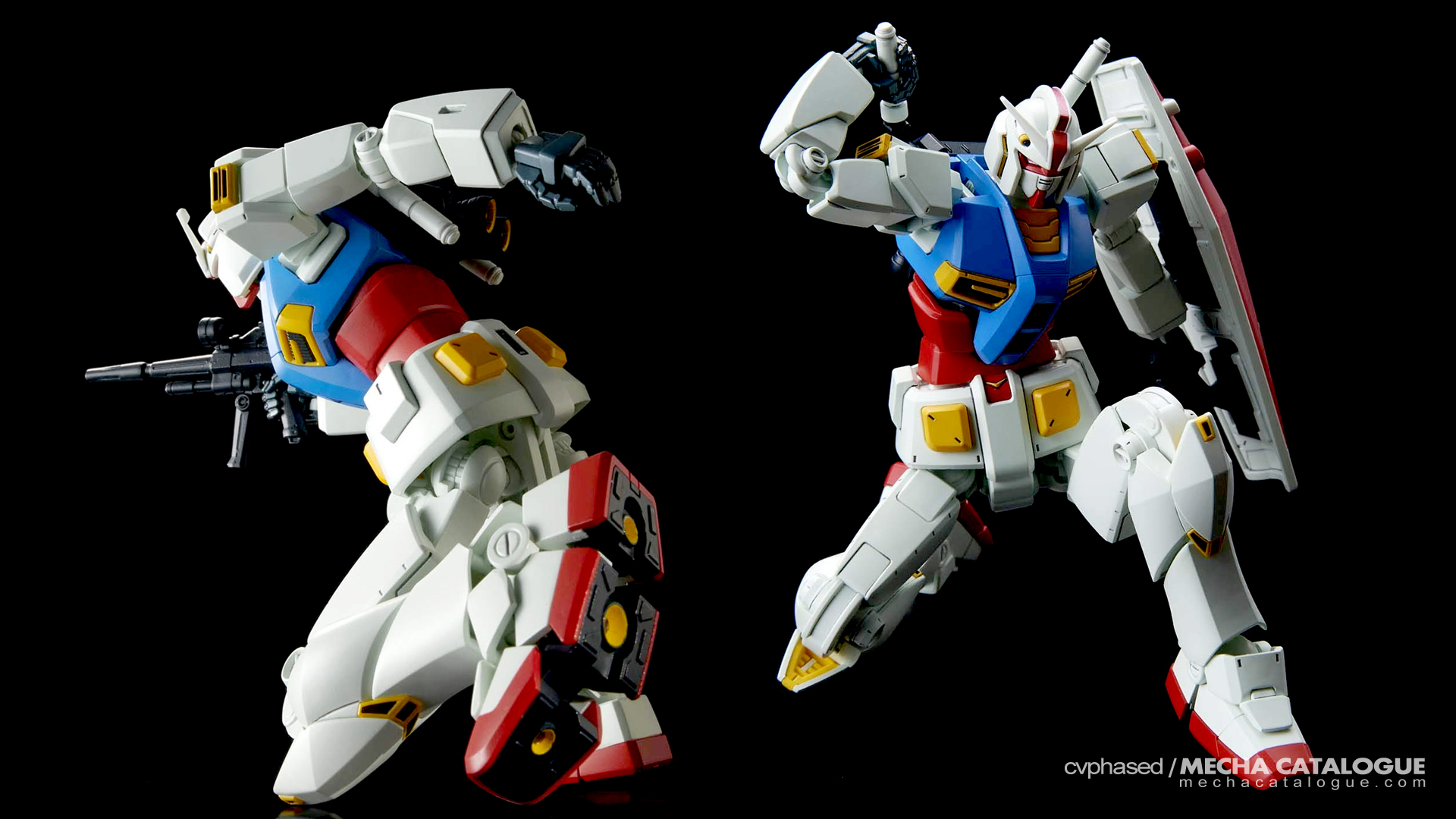 Both leg units are angular in contrast to the classic design, especially to the rear where they are almost flat, and of course more vents. The feet also received some streamlining, with the red parts now more flushed with the white on top. They are also slimmer overall. For weapons, the beam rifle is more or less the same. That’s not the same for the shield though as the iconic Federation cross symbol is gone, giving way to a more visually cohesive and subtler white cross. 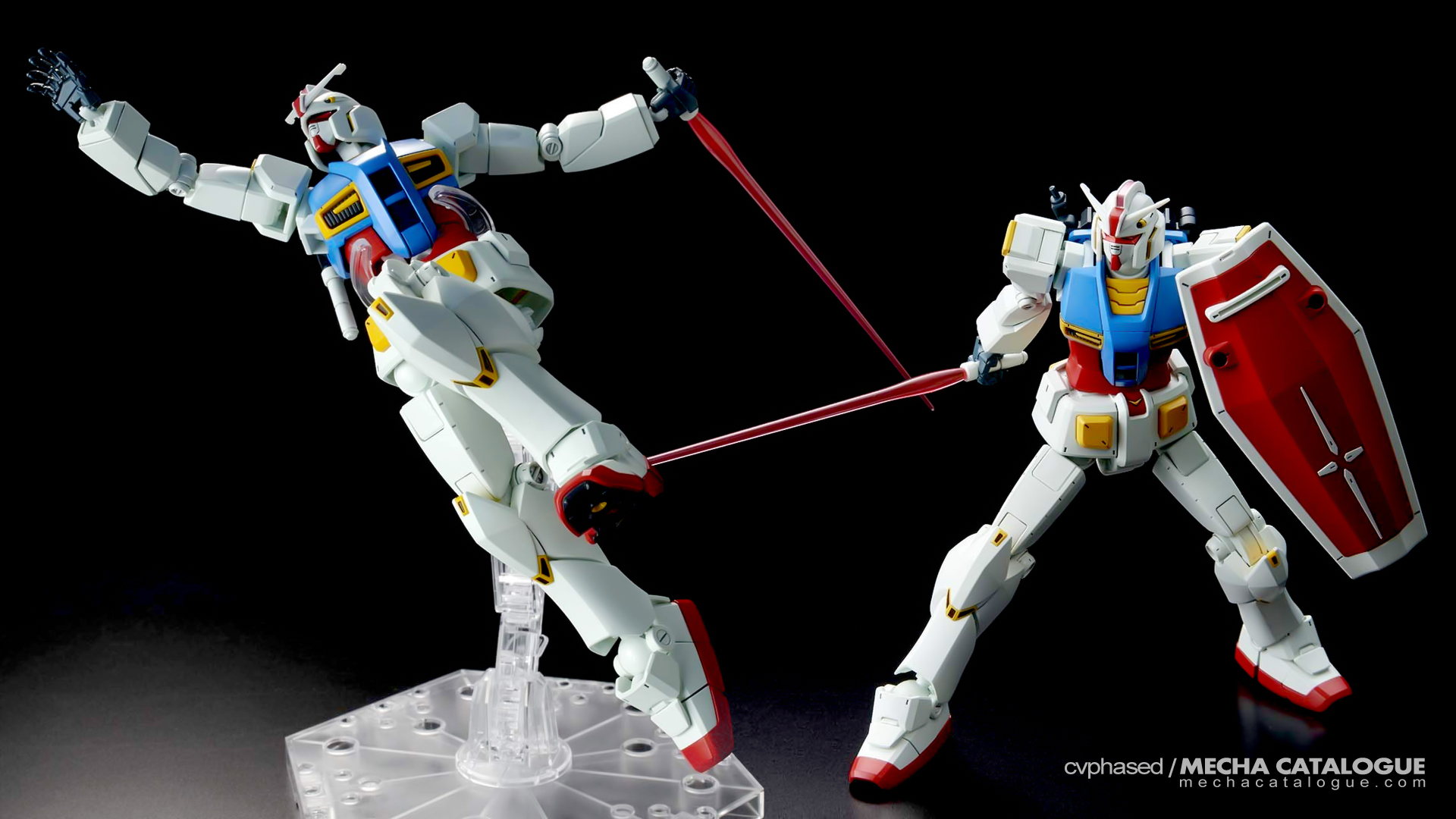 So how does this translate to the High Grade kit? Two words — crazy articulation. To compliment the modern lines and visually seamless flow of the design, the articulation is meant to be an analogue to how an human body moves and at times, even going beyond. As seen in the two poses above, this kit can draw its own beam sabers and can do natural knee bends without effort. Speaking of knee bends, you may notice that the skirt armors don’t break up while still accommodating leg movement. This is because apparently, Ken Okuyama has been specific that the hip/skirt armors shouldn’t move. So how does the kit accomplish such movement despite this limitation? 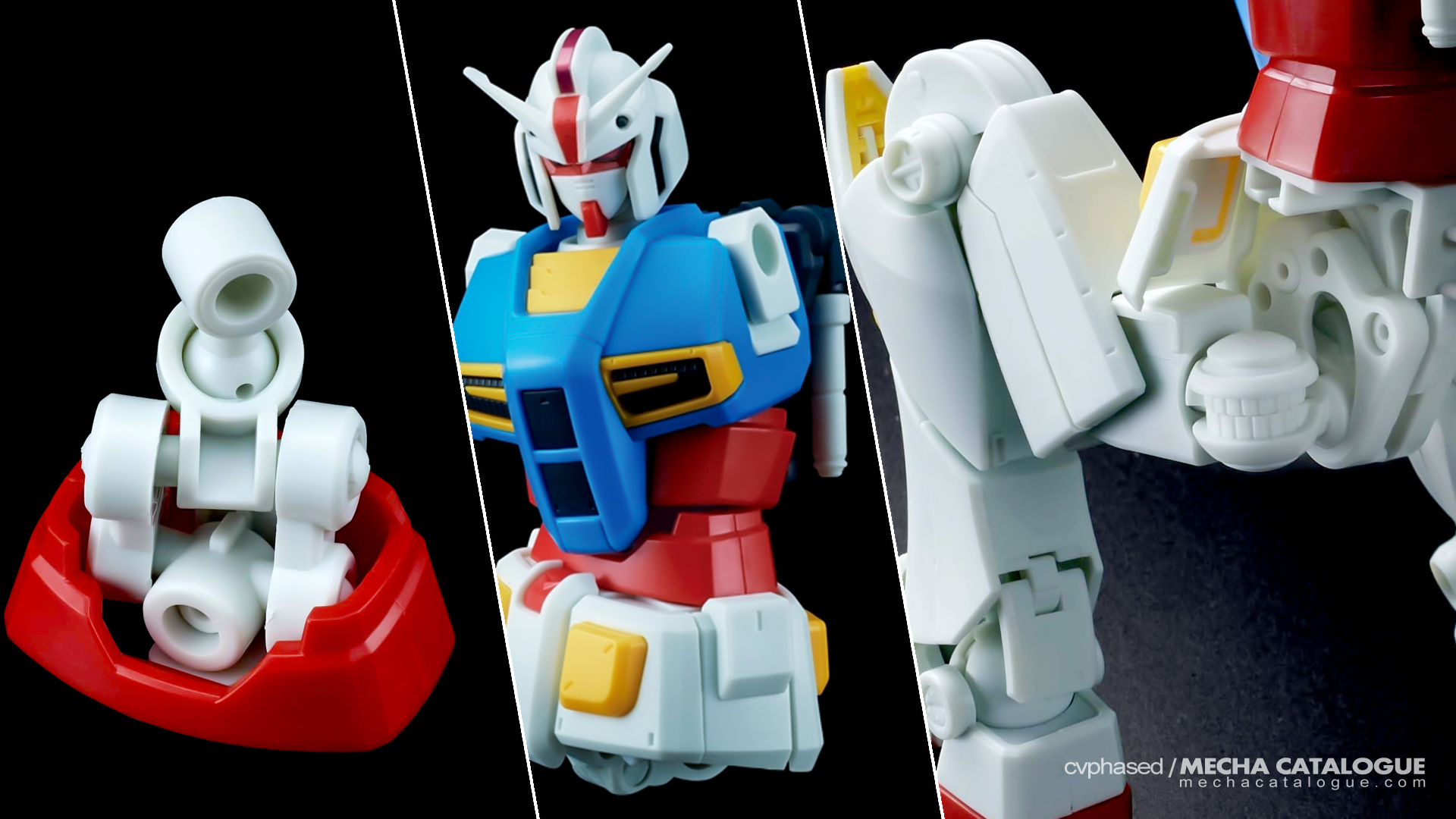 Crazy engineering. And for a High Grade, this kit is probably the first to use such complicated joint assemblies. To accomplish that single hip armor look, the hip joints not only shifts downward, but also includes another forward swivel at the top of the leg, allowing it to bend and clear the hip armors without moving the latter. This seamless aesthetic is also applied to the knee armors as they don’t shift along with the knees when bent, something that Bandai Spirits designers have been obsessed with, especially with larger scale kits. You can also see in the images above that the feet can remain planted to the ground by splitting into three segments. Finally, and shifting back to the torso, we can see numerous swivel, hinge, and ball joints to replicate that very human-like movement. Previous High Grades will just use a couple of ball joints to accomplish this.

Overall, I am very excited for this kit. It’s always nice to see another take of the classic RX-78-2 Gundam design and unlike with the 30th anniversary kit where it’s just additional panel lines, this one is a great revamp with complex engineering just to maintain that aesthetic. So it is safe to say that I am definitely getting this kit and would stand them beside my other RX-78-2 Gundam kits. I should probably count them at some point.