Taking the center stage on the last day of Bandai Spirits’ Hobby Next Phase Week is of course the Gunpla stuff. That said, many were disappointed with the reveal of the Wing Gundam Zero EW as the next Master Grade Ver.Ka. kit so here’s something sort of interesting. 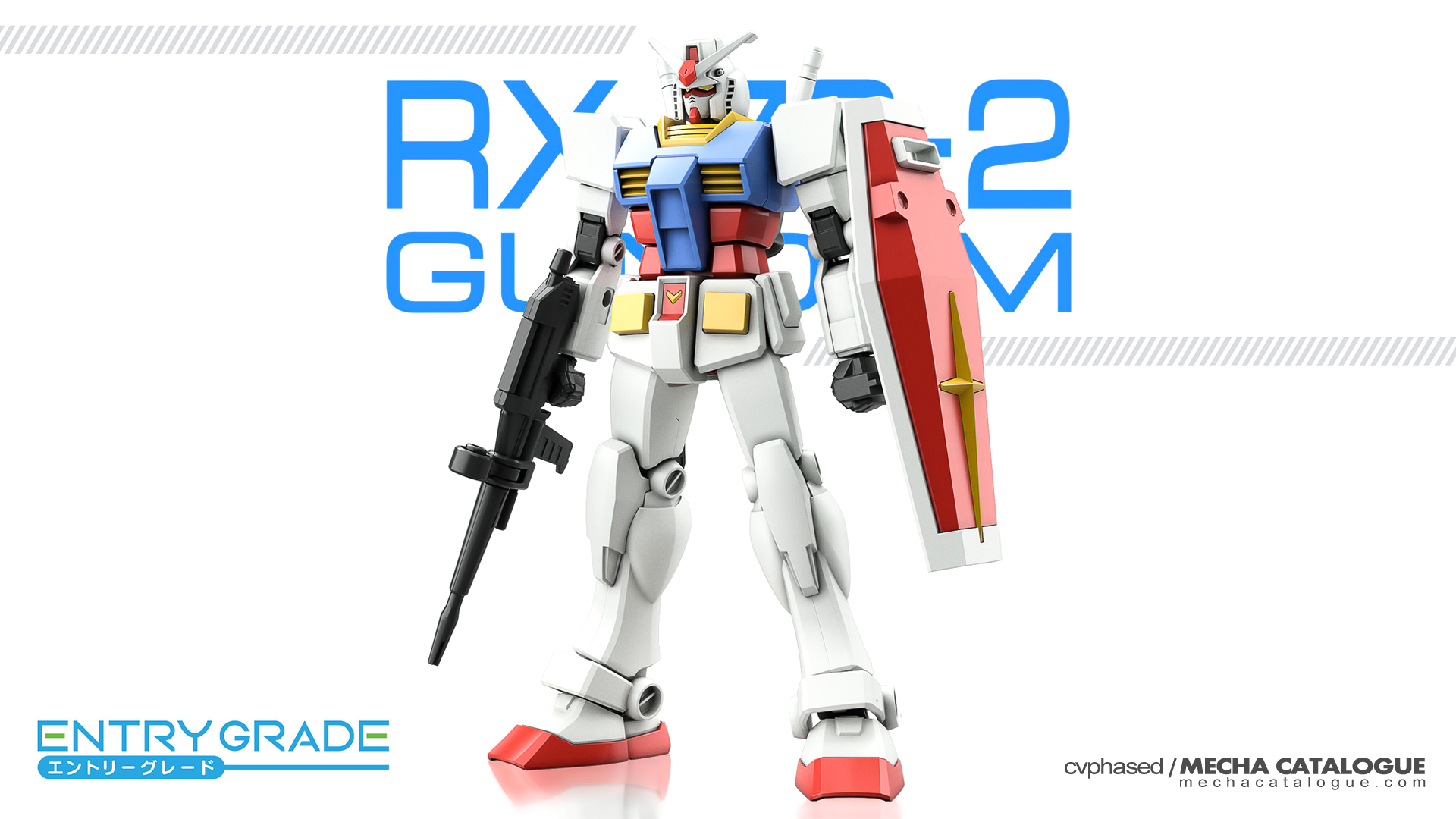 Yes, we are getting yet another RX-78-2 Gundam in 1/144 scale, but it’s not a High Grade, nor a Real Grade kit. Instead, this is the Entry Grade RX-78-2 Gundam. And no, I’m not giving it the "EG" shorthand other people often do because Bandai Spirits themselves didn’t. Anyway, Entry Grade kits are targeted to younger modelers featuring familiar characters from various franchises, including Dragon Ball Super and Kamen Rider. These kits have no articulation but boasts excellent color separation and Touch Gate assembly (no tools required). However, the Entry Grade RX-78-2 is quite different from previously announced kits, and these differences are highlighted by three points. 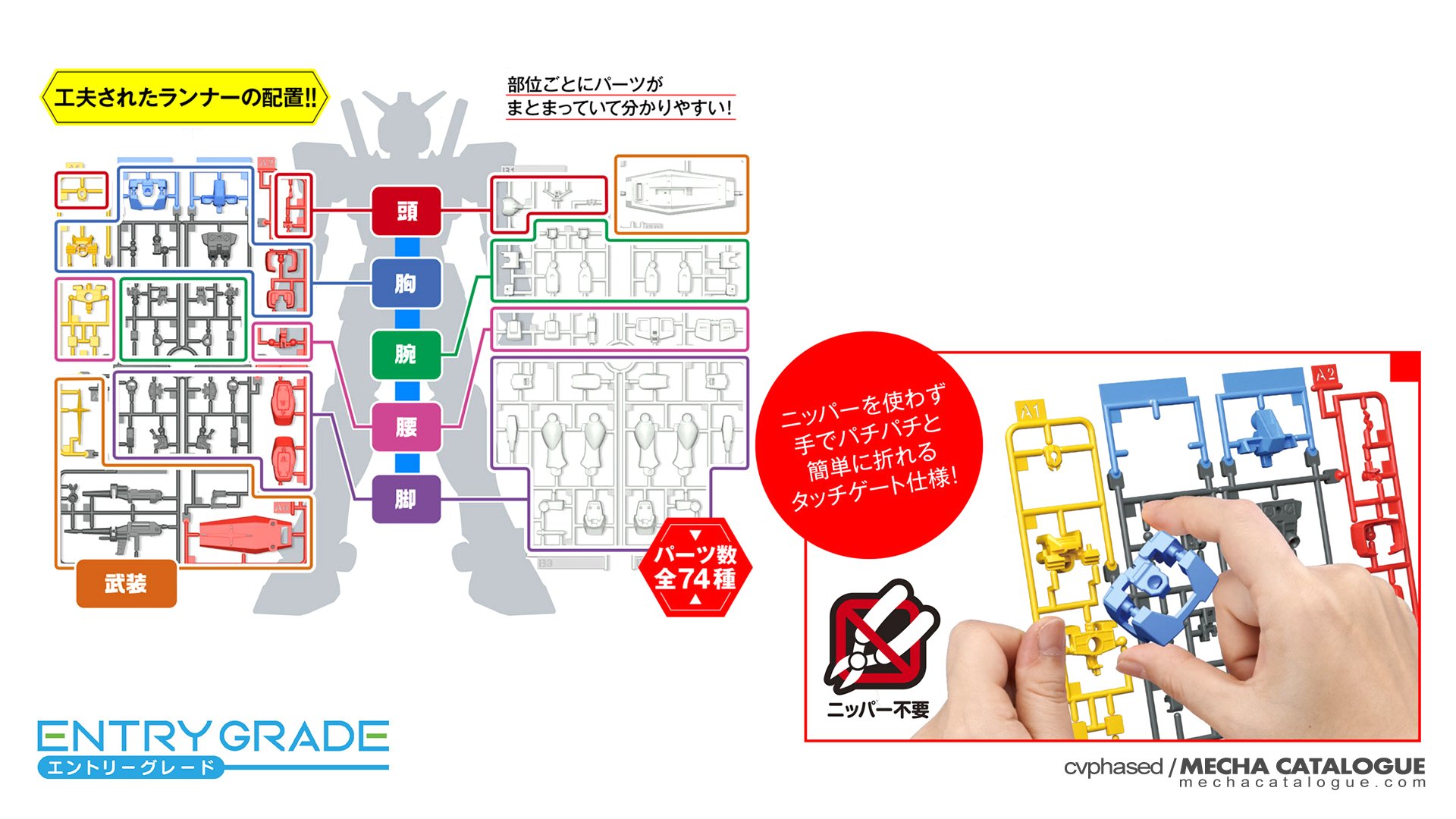 First, ease of assembly. As mentioned, Entry Grade kits require no tools to build, perfect for younger modelers or those who wanted to get into the hobby easier. Besides this, parts for each section of the mobile suit are grouped together on the runners. Looks familiar? It should be this is how runners of High Grade kits tagged with the &quot’Fine Build" Evolution Point are laid out. Examples include the HGAC Leo, HGAC Maganac, and HGFC Death Army. 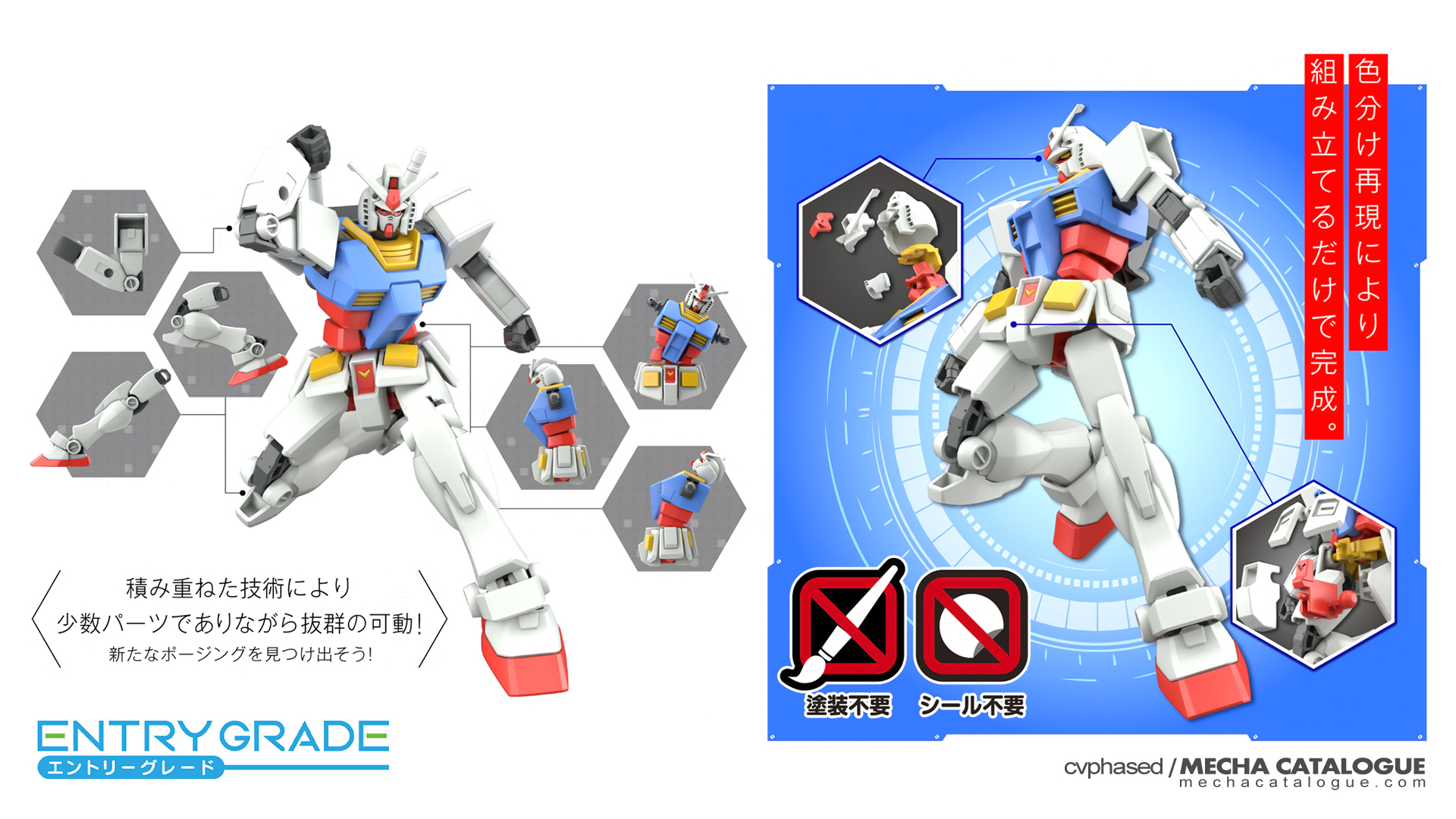 Second, articulation. Unlike other Entry Grades, the RX-78-2 Gundam is very articulated and has poseability that even surpasses some modern High Grades. The kit doesn’t include any polycap parts but each joint is engineered to provide the widest range of articulation using the smallest number of parts. Looking closer at the runners, the joints are assembled via a combination of ball joints and c-clips, producing the range of articulation seen above.

Last, color separation. For something meant for beginners, this kit doesn’t require any stickers. Just take at that "V" marking on the crotch armor. For most kits, this part is often left for the builder to paint, but not for this guy, Even the head unit is already color accurate for the most part. You’ll only need to panel line the side vents and paint both the vulcan guns and rear head camera unit.

In less than a year’s time, we are getting four 1/144 scale RX-78-2 Gundam kits: the G40, Gundam THE ORIGIN version, the upcoming HG [Beyond Global] version, and this guy. As much as I don’t want another kit of the original Gundam, this one has me curious and would consider buying it just to check out how much they can pack in such price point.