With COVID-19 ruining most of our outdoor plans, I guess there’s no better way to stay indoors than… build Gunpla (LOL). And so, Bandai has dropped a slew of Gunpla announcements that should get us excited as we wait for the all-clear signal. Like my previous posts on the subject, I would be tackling only those that interest me those who want a complete list of announcements can head on to the Bandai Spirits Hobby site. 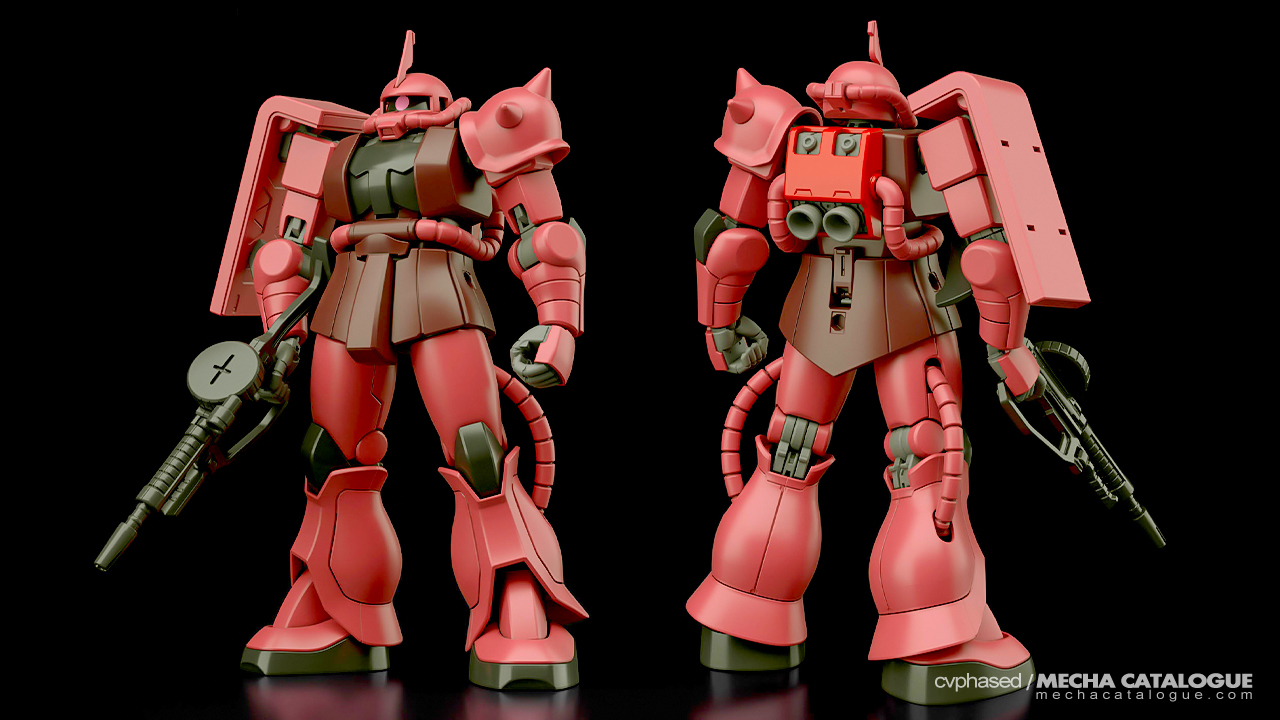 The Gundam THE ORIGIN version of the Zaku is considered by many as one of the best High Grades Zaku kits out there, with the level of sculpted detail, proportion, and poseability. That said, we’ve yet to get a modern Zaku kit in the HGUC ‘mainline’, with the original dating back to 2003. Looks like Bandai Spirits had the same thoughts and so, we’re finally getting a modern HGUC Zaku II kit, albeit as a Char Aznable custom. The aesthetics matches the original Gundam animation model and is a perfect companion piece with the ‘revive’ HGUC RX-78-2 Gundam. Outside of these, here are some more features to take note of. 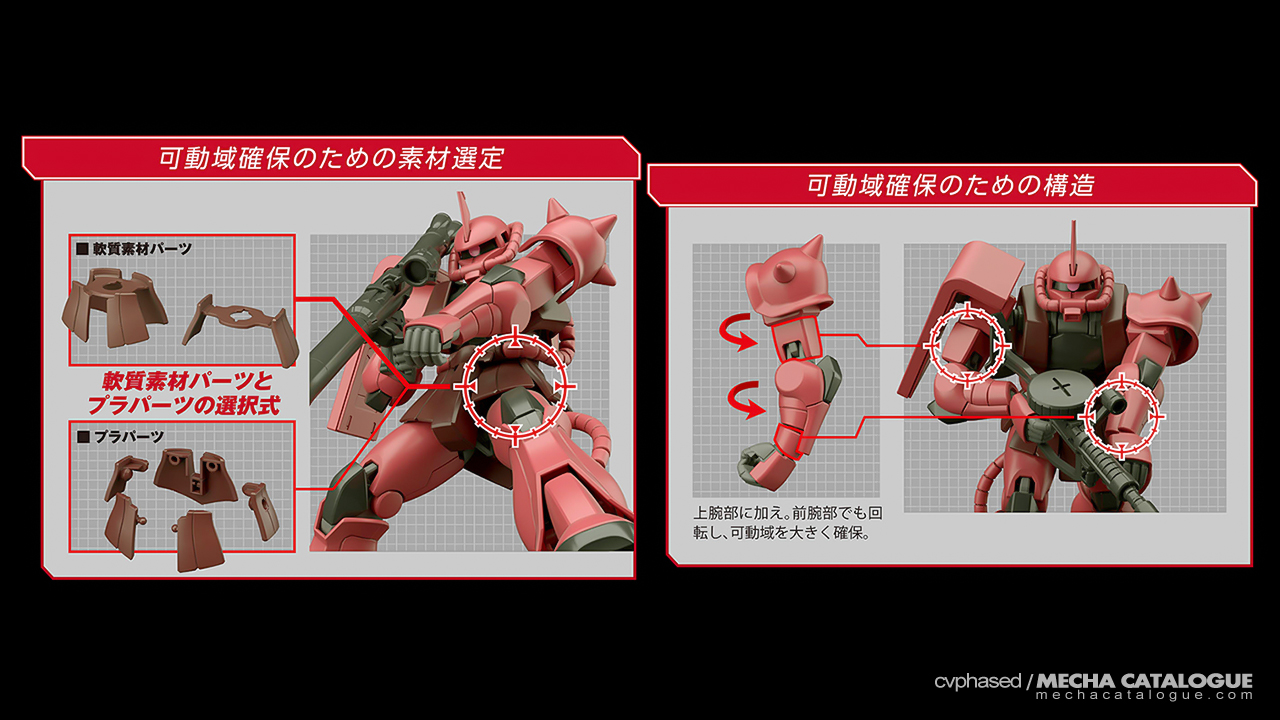 This kit provides a couple of options building the ‘skirt armor’ pieces. First is the standard assembly involving pieces attached via ball or hinge joints. The alternate option, and this is something new, is using single flexible pieces for the front-back and side skits respectively. I’m not sure what material the latter is made of, though I am hoping it won’t be a problem when it comes to painting.

The arms also have two separate points of rotation — on the upper arms and the forearm sections. This allows you to display the Zaku with the inward-bending elbow joint which is accurate to the animation model, as well as the more natural forward elbow bend. Both should add a wider range of arm movement for poses. 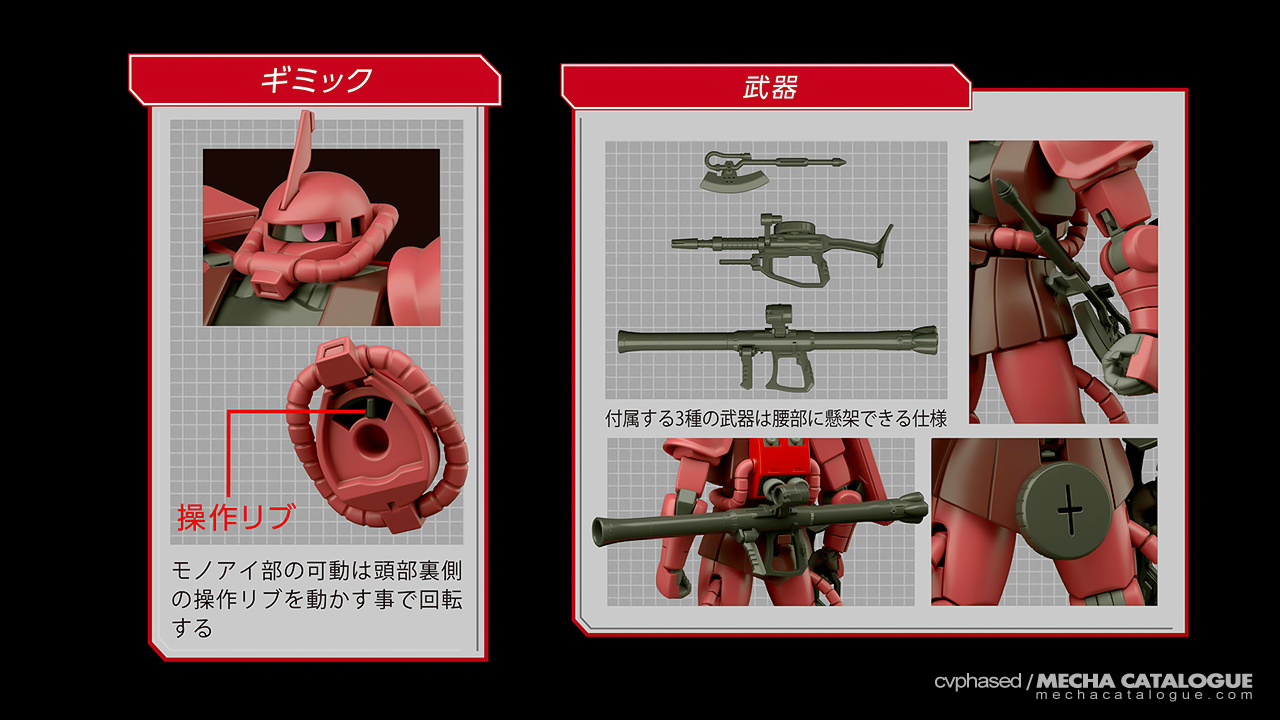 A switch under the head unit allows for moving the monoeye unit, which I hope is a pink translucent piece rather than a sticker. For weapons, the kit comes with the standard Char’s Zaku II set of weapons — including the heat hawk, machine gun, and bazooka. You can mount each of these on the side or rear skirt armor. 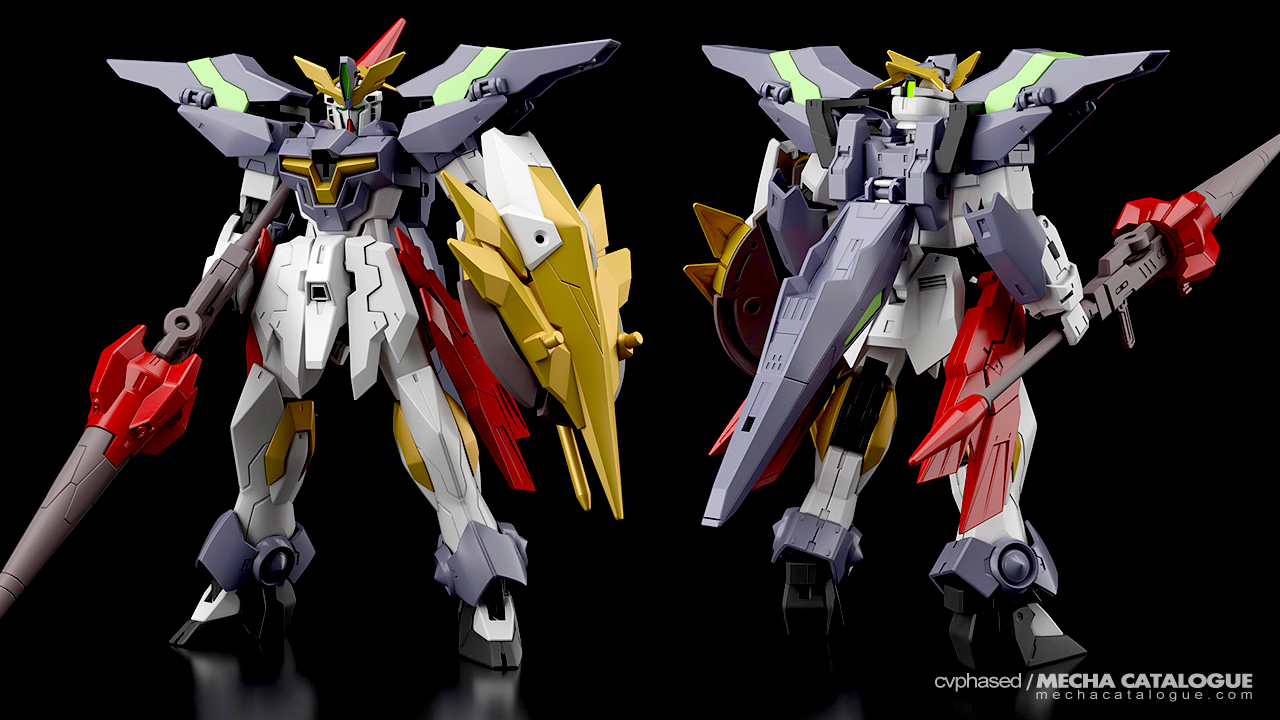 They also revealed a couple more kits for Gundam Build Divers Re:RISE season 2, staring with the mid-series upgrade of the Gundam Justice Knight. Keeping with the mobile suits used by Athrun Zala from Gundam SEED/Destiny, we have the HGBD:R Gundam Aegis Knight. Looking at the design, it does share some similarities with the Aegis Gundam, but not too similar that I’d easily call an upcoming HGCE Aegis Gundam kit. Unlike with the Gundam Justice Knight where the parts themselves immediately give away that the HGCE Infinite Justice Gundam was in the works. I could be totally wrong though. 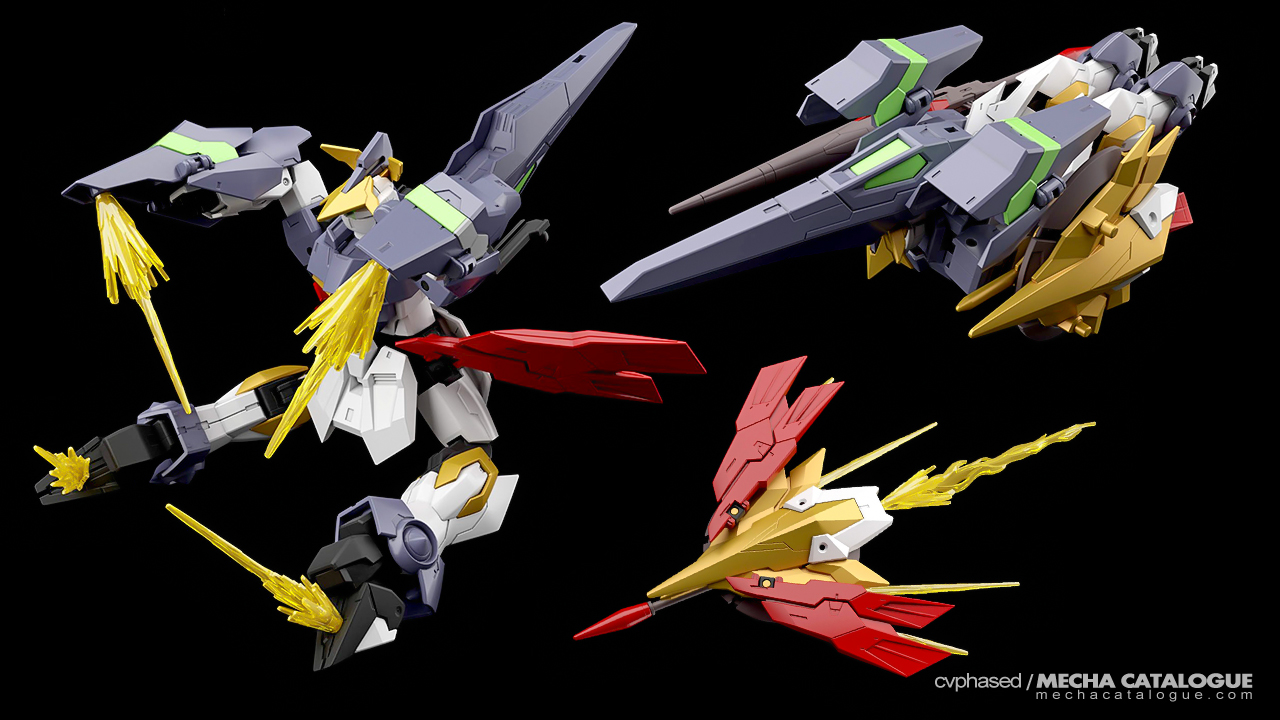 That said, it does have a transformation similar to the original Aegis Gundam’s, albeit crude and quite frankly, looks forced. It also has a flight mode which looks better and shares the same transformation scheme as Gundam Kyrios from Gundam 00 where the nosecone just flips over. Gundam Aegis Knight still uses a lance as its signature weapon, but complements that with a new shield which looks a tad bit like the Aegis Gundam’s. This shield, along with the lance, and the skirt armor panels, can then ocmbine to a larger weapon that appears to launch on its own. Overall, I can’t really say if this guy looks better than the Justice Knight, though I’m still considering getting both kits and paint them in this color scheme. 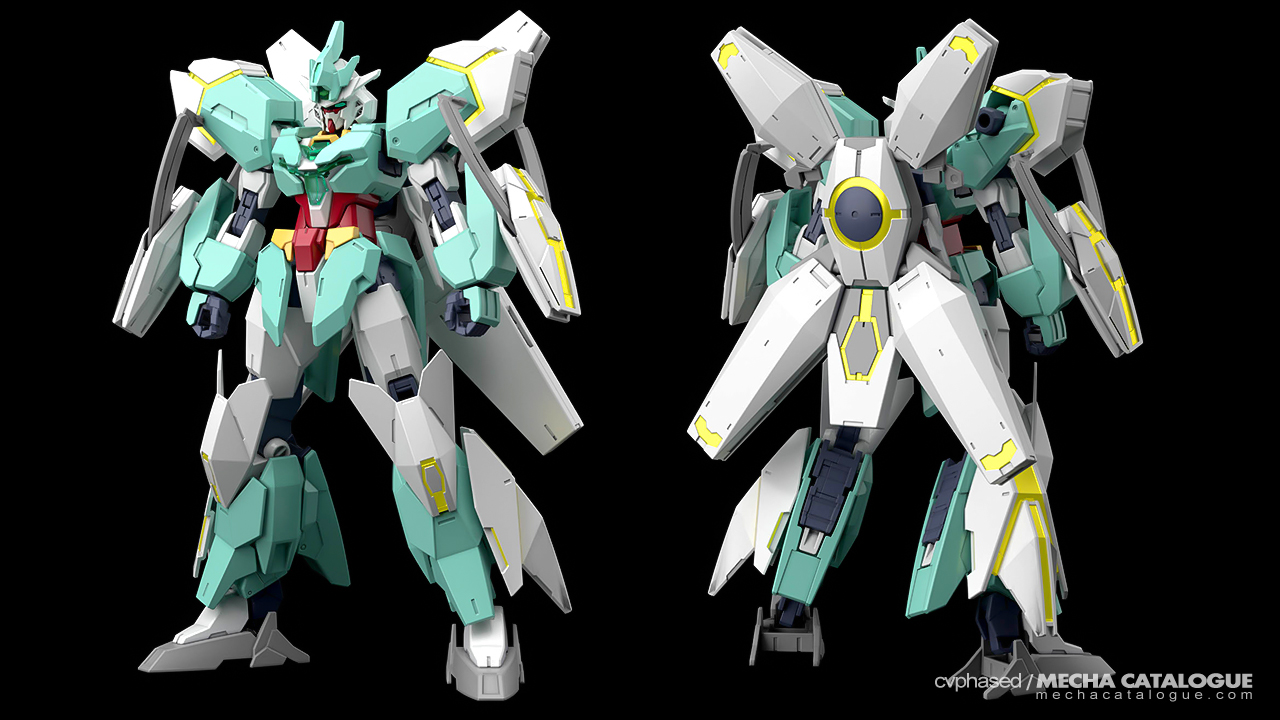 Completing the (supposedly) two remaining Planets System units is this guy, which is based off the Stargazer Gundam from Gundam SEED C.E.73 -Stargazer- based on the golden channels all over the mobile suit. This is either the Saturn-Six or Neptune-Eight unit and the design looks good — I just don’t like the sea-green color scheme, not one bit. I wish they stuck with the same colors as the Stargazer, or even the Lunagazer. If I’ll get this guy, I would likely paint the sea-green parts with some shade of gray. 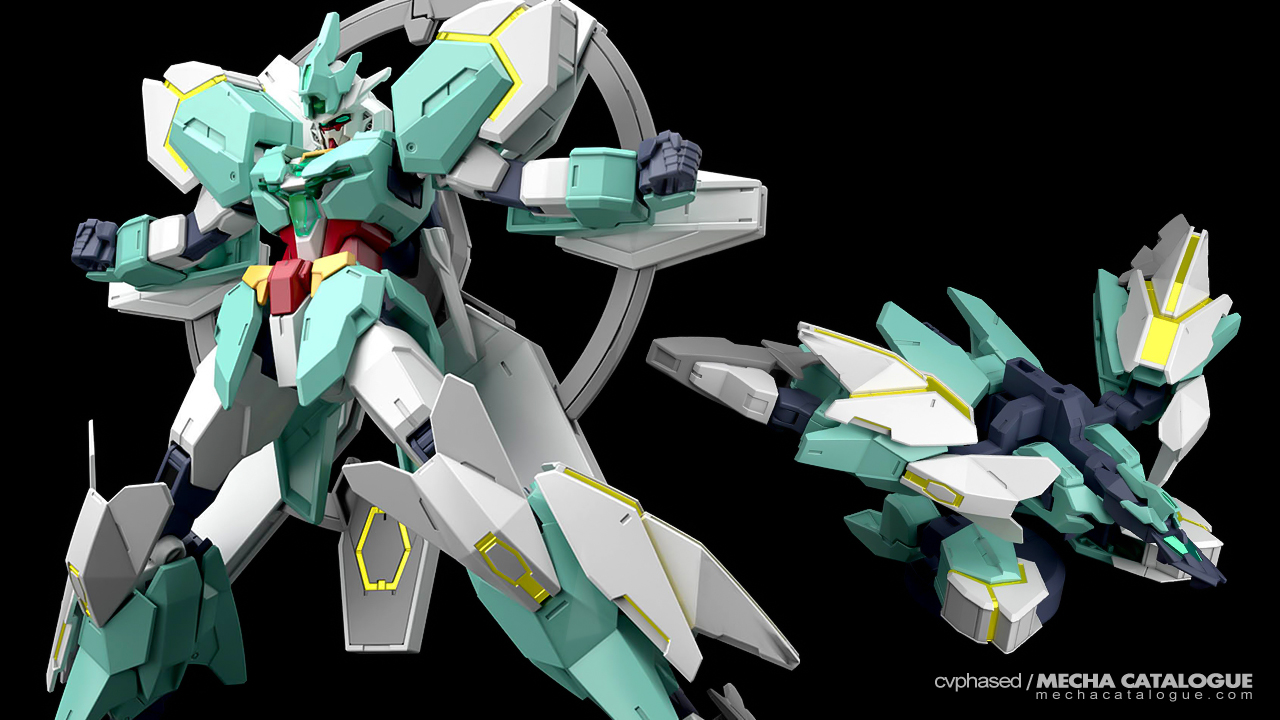 Much like the Mercury Armor/Mercuone Gundam, it appears to come as a standalone kit and won’t come with a Core Gundam II unit which is a bummer, at least for me. The Stargazer-esque ring unit will also be sold as a separate kit.