One of the things I noticed with the marketing for OBSOLETE is the emphasis on the 8 feet tall EXOFRAMES. In fact, their website — project-obsolete.com — contains significant in-universe attempts to decipher what these machines are and how they work. That said, if you found it difficult to navigate their very immersive website, then you’re in luck as here’s a copy of the pertinent information released about the EXOFRAMES. Oh and this can easily go into TL;DR lengths. 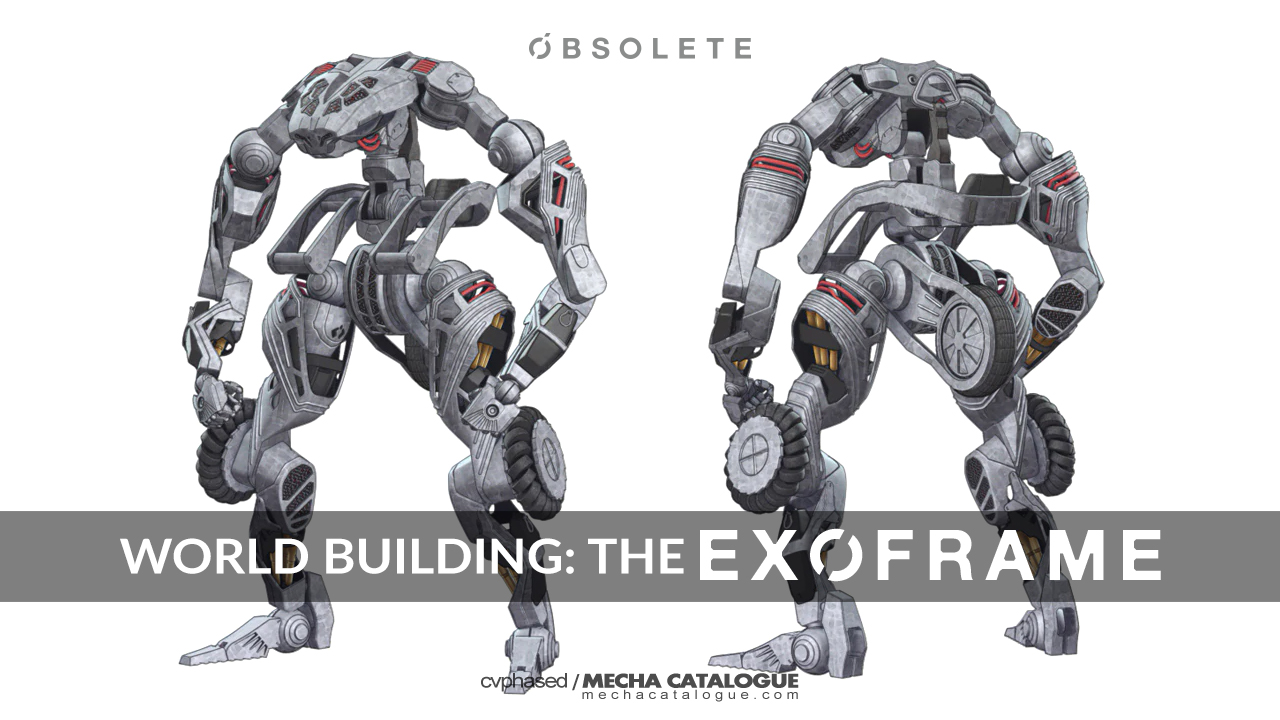 The following is an excerpt from the overview of a document made public the same year as the 2014 visitation and “provision of technology by trade” from the Peddler aliens and the hasty formation of the Advisory and Investigation Committee of Alien Technology of the Executive Office of the President of the United States (EOP).

The official report made by the United States government regarding the general-purpose humanoid robots brought in by the aliens was the earliest, thus the term “EXOFRAME” (Enhanced Xenobiological Organic FRAME) it proposed was subsequently popularized worldwide.

In various parts of the report, almost exaggerative expressions show the astonishment towards and high expectations of the alien technology. However, upon entering the Sankt Gallen Arrangement, the government’s disposition towards the EXOFRAME changed, and Investigation Committee of Alien Technology was later disbanded. Afterwards, under executive order, the Extraterrestrial Trade Regulations Bureau was established within the Department of Homeland Security to regulate, observe, and administer this technology.

We have decided to call the consciousness-controlled general-use humanoid robot “Enhanced Xenobiological Organic FRAME”, or “EXOFRAME”.

The required compensation for this machine is 1,000 kg (1 T) of limestone. (It is assumed that they require sedimentary rock with a 51% calcium carbonate content percentage.) At present, transactions for EXOFRAMES have been occurring in every location across the globe, consistent with their claim to “not distinguish between nationality, ethnicity, ideology, or any other discriminator” and “offer these terms of exchange impartially and equally to all of humanity”. If the limestone is placed outside (1,000 kg ±500 g) anywhere on earth, the alien’s flying object will appear, collect the limestone, and leave behind an EXOFRAME. Just the other day, we received a report stating that the Argentina’s Esperanza Base on Antarctica had successfully “traded” with the aliens.

We have yet to understand regarding the EXOFRAMES power supply. One hypothesis is wireless power transmission from the alien’s mother ship. Another hypothesis is that the fluid in the EXOFRAME stores a chemical energy capable of supporting many hours of mobility.

The EXOFRAME’s standby state is box-like, with all joints folded. We call this state “package mode”. When a pilot touches the EXOFRAME’s surface, the mesh portions of the machine light up and the gyro on its back rotate. It automatically factors the surrounding conditions and the amount and weight of any installed cargo as it becomes a human form, then it can be mounted and operated. (If not mounted and operated, it will return to the stand-by state in approximately 30 seconds.)

The EXOFRAME’s operating system can only be explained as the machine itself reading the consciousness of the human and moving accordingly. Though in the beginning of this investigation it was thought that it was reading human physiological responses, similar to brain-machine interface, what the machine is actually reading is unclear. The machine is operated from the cockpit (we call it the “Saddle”). The operator does not use any physical operations such as switches or levers. Just “by thought”, the machine can be operated as though it were another body of their own. Though we say “by thought”, apparently not even that is a definite rule. There are also cases where patients with higher brain dysfunction operated.

To a certain extent, if trained in operation, it is also possible for it to take on non-human postures, and can be used as a small vehicle as well.

The Saddle adheres to the operator, and has mechanisms that reduce all mechanical shock. For extremely simple operations, it is also possible to remotely operate short-range without sitting in the Saddle; in the “start-up/boarding” process some sort of “linking” can be seen between the pilot’s thoughts and the EXOFRAME. The greatest distance and level of precision possible for EXOFRAME remote operation are currently under investigation.

Note 1: Details concerning the EXOFRAME’s consciousness-control are presently unclear. It is tentatively being called “consciousness-control”, but what this “consciousness” is has yet to be understood. However, if this principle could be solved through future investigation, the potential would be so limitless it could possibly bring us to finding the reason for humanity’s existence.

Note 2: There have been various claims on social networking sites developing mental illnesses as a result of EXOFRAME operation. These are presently under investigation. However, our investigation team has yet to confirm a single case, and believe it highly possibility for them to be fabricated.

Note 3: Due to the lack of a communication system or apparatuses to sense surroundings, when operating for a specific purpose it would be necessary to customize the EXOFRAME accordingly. In reports, many pilots say it is possible to use an on-hand tablet while operating an EXOFRAME.

Though its difference with the human body can be seen in the limb proportions, it can reproduce almost any human movement. The manipulator’s precision is especially high; although differing in size, it can make as minute of manipulations as the human hand. Just as humans are “animals that use tools”, EXOFRAMES have the potential to be “tools that use tools.”

If consciousness-control allows even those who have touched the EXOFRAME for the first time to have mastery of the basic operations, then training can be a few hours, or at the most, a few days. This makes it decisively simpler than existing automobiles and heavy machinery. There are hopes to apply this technology in various fields in the primary and secondary industry, as well as to the medical care of disabled individuals.

The inside the metallic outer shell (exoskeleton) of the EXOFRAME is filled with a fluorescent blue inner-machine fluid, much like blood. They do not have a discernible engine, battery, control unit, or drive unit that can be seen as ordinary machinery. Though the details are uncertain, due to the fact that when the liquid that fills the machine is lost the EXOFRAME’s the overall performance deteriorates and, when approximately 80% is lost it loses all mobility, it is speculated that this liquid is the EXOFRAME’s controller, drive unit, and battery, in addition to playing a role in all other parts necessary for the machine to operate.

Many researchers claim that with such construction the EXOFRAME is not a simply a machine, as it has extraterrestrial biological matter as its foundations.

Note 1: When the fluid inside leaks out, after emitting light for a moment, it turns transparent. At present, it has not been confirmed if the discharged liquid has an impact on humans or the environment, but our committee conducts its analysis under strict control.

Note 2: Of all the parts the EXOFRAME is composed of, there is a high possibility that the Saddle and wheels on the legs were added to the original machines by the Peddlers for humans. Consequently, we must be cautious in speculating the ecology of the Peddlers based off of the configuration of the EXOFRAME.

Its dependability is exceedingly high. As long as it was adequately operated, there were hardly any malfunctions or failures. Though it is currently under investigation, it is very likely it was designed for prolonged use in harsh conditions without maintenance.

In turn, we were unable to find a way to clean the joints or maintain/recondition the outer shell. In addition, we were unable to find a way to refill the machine’s internal fluid thought to be the nucleus of the structure, nor does it seem to be purified from within. Thus, in the case of severe damage or defect, it can only be disposed of or replaced. However, each part of the machine is highly modular, making it possible to easily remove parts in order to analyze the machine or exchange parts.

This is quite the literature they’ve provided. I’m really hoping that the series will utilize or explain some of the concepts they’ve introduced here. OBSOLETE is set to premiere in December as a YouTube Original.