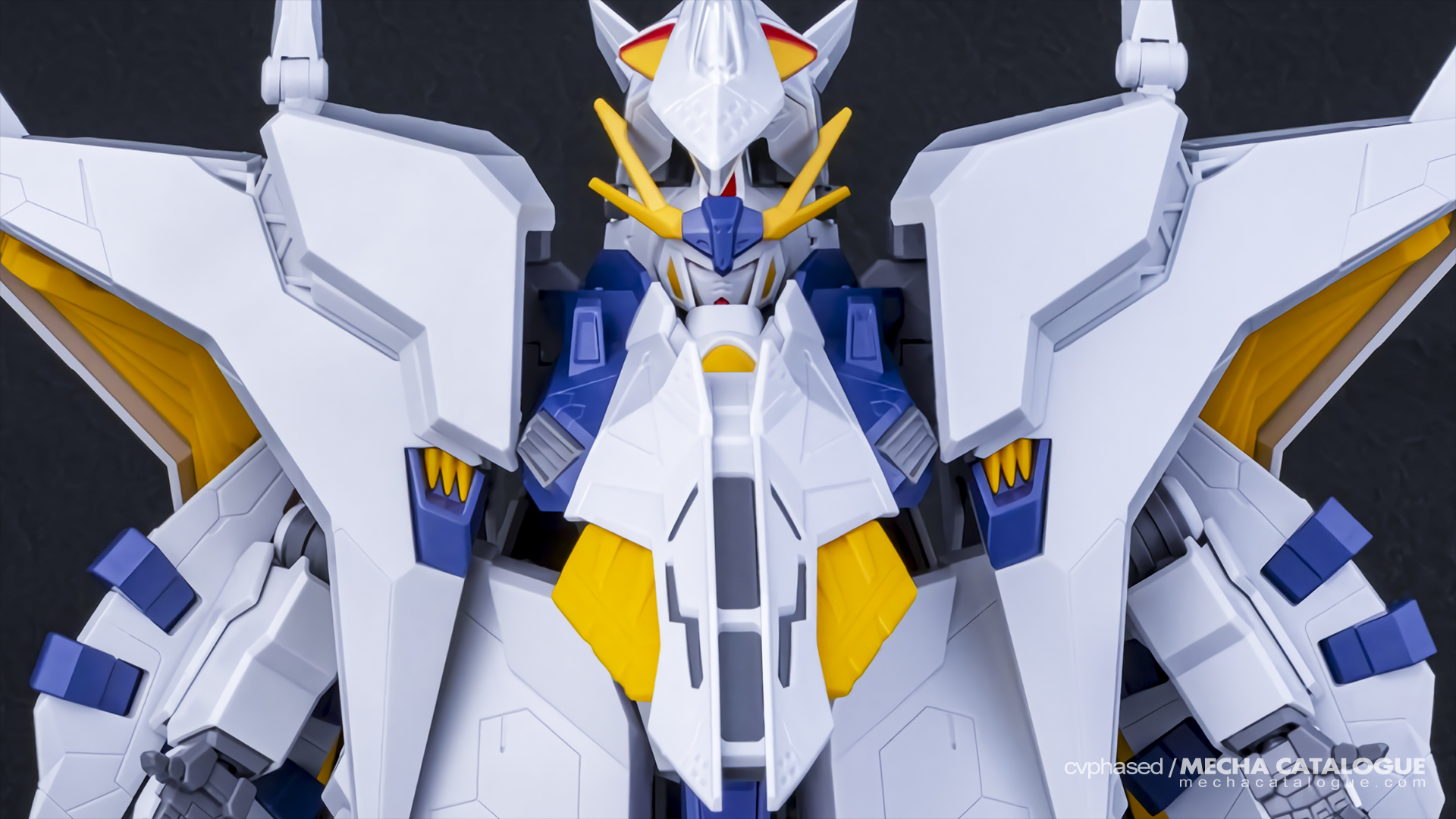 I’m not sure if this is going to be a yearly thing, but it seems like Bandai Spirits is doing a larger High Grade release during the last parts of the year. We had the HGUC Narrative Gundam A-Packs in 2018 (which I’ll be resuming the build hopefully next week) and in 2019, we are having the HGUC Penelope from the Mobile Suit Gundam: Hathaway’s Flash movie trilogy slated for a winter 2020 release. In any case, the awesome people at Dengeki Hobby Web managed to get a near-release prototype of the kit and managed to do a snap build preview to show how it will appear out of the box. So let’s dive in! 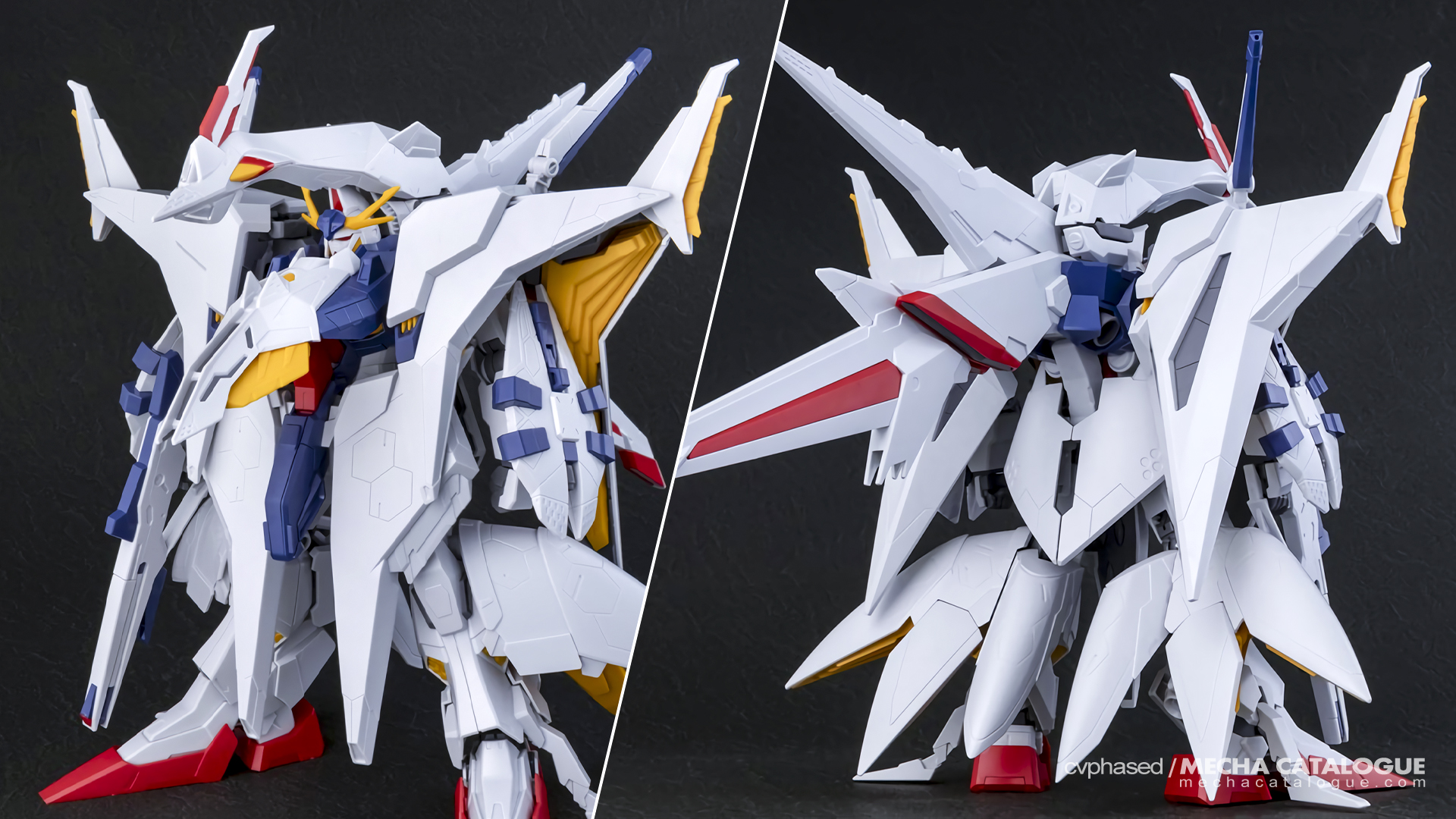 Here’s a good quick look at the HGUC Penelope built out of the box. The aesthetic looks familiar as I recently detailed my copy of THE ROBOT SPIRITS ⟨Side MS⟩ Xi Gundam — its twin mobile suit. There are lots of surface detail, with the familiar hexagonal pattern also seen in the aforementioned Xi Gundam figure. It also boats a good degree of color accuracy with the vents molded in yellow plastic and the various blue bits that break up the mostly white mobile suit. We’ll go into detail in the succeeding images though this is likely going to be a complicated-looking brick when completed. 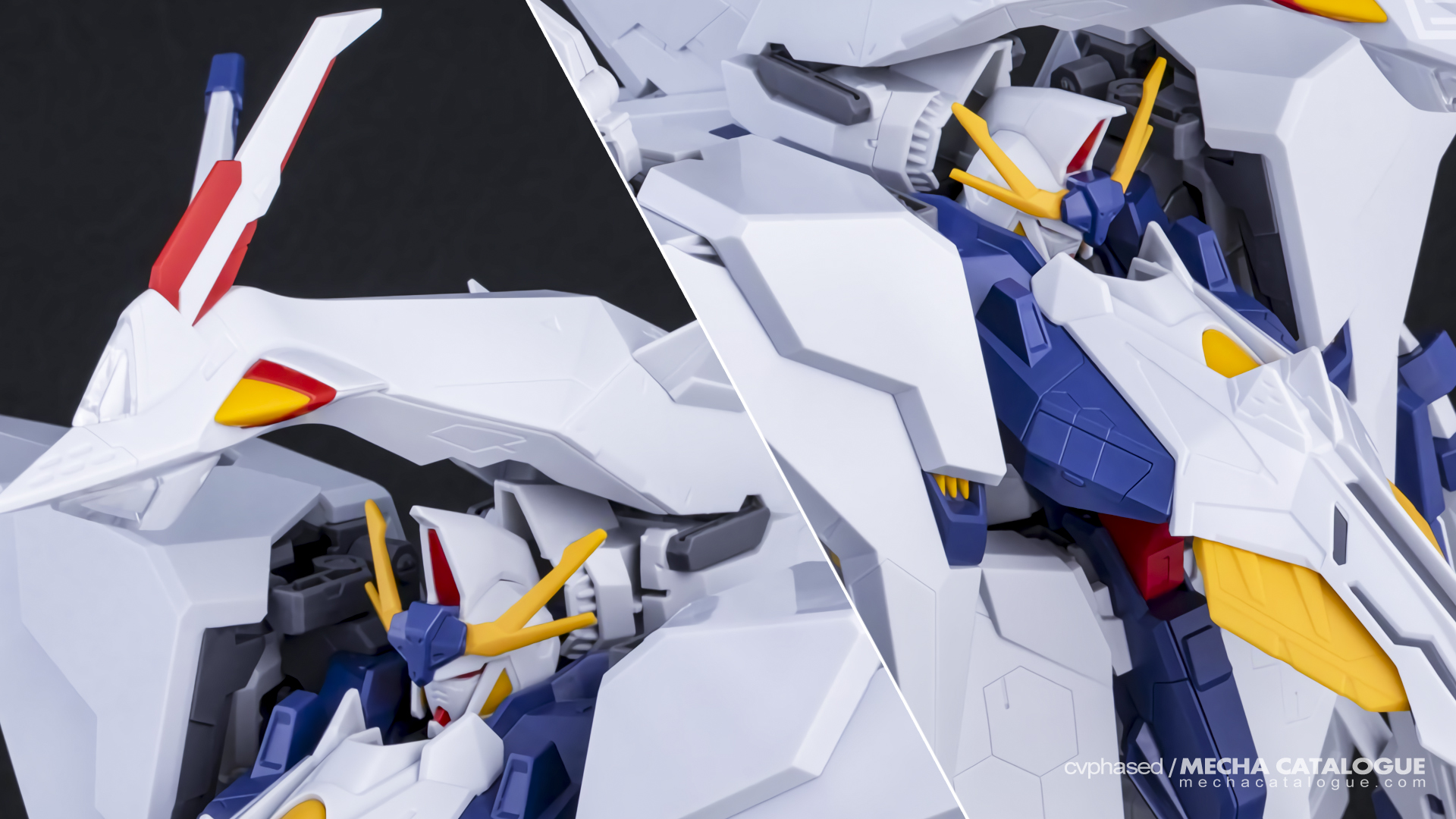 Next up are some close ups of the head and top of the torso plus the Fixed Flight (or FF) Unit. Okay, I can’t help notice the loads of varying assemblies surrounding the head unit, though I don’t think those would hinder head articulation to considerable a extent. Speaking of the head unit, it is gloriously constructed in multiple colors, with the side vents and v-fin in yellow while the head camera and other details are in red. Meanwhile, the upper torso continues to have those surface details and tick marks that everyone would enjoy panel lining, if not borderline getting tired of it. On top of the blue panel appear to be exhausts which would use some black pant while gray details from the internal mechanics would show through the armor and break the white sections. 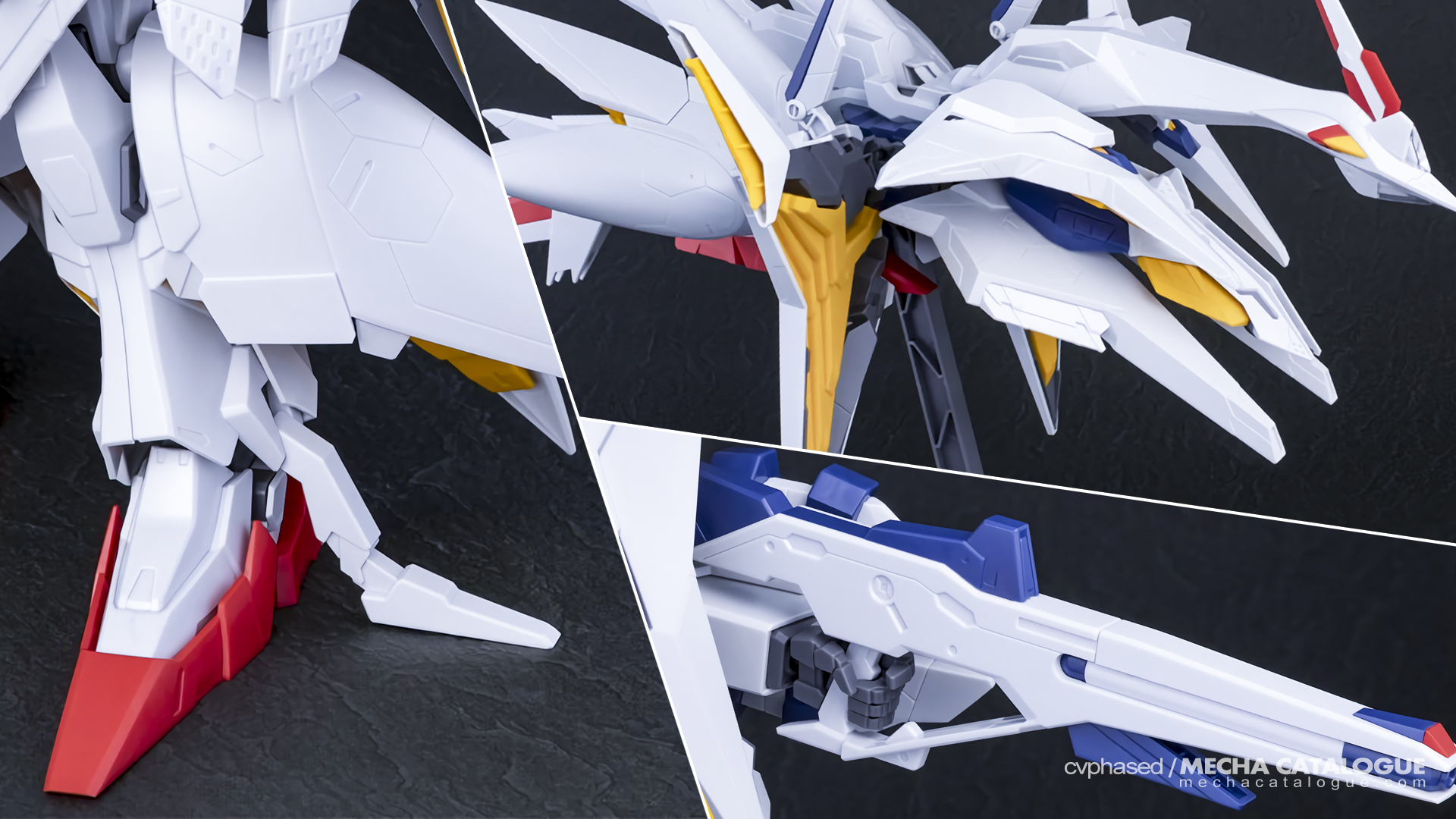 Taking a step back, here’s the Fixed Flight Unit on it’s own. If it looks like a bird, it is because it’s designed to look like one. Large swaths of yellow plastic make up the vent and vent-like sections while red bits are seen on the ‘head’ as well as the stabilizer sections on the rear. It does make me think if we’ll need to disassemble this when combining with the Odysseus Gundam. Going further down are the legs and feet which still continue the hexagonal surface details. I’m not the most familiar with the Penelope design but the leg units appear to include additional struts for balancing this behemoth of a mobile suit. And quickly going to one accessory, we have the beam rifle molded in three colors. I appreciate how the red bit at the tip of the barrel appears to be a separate red plastic. They could’ve easily go the lazy route on such details. 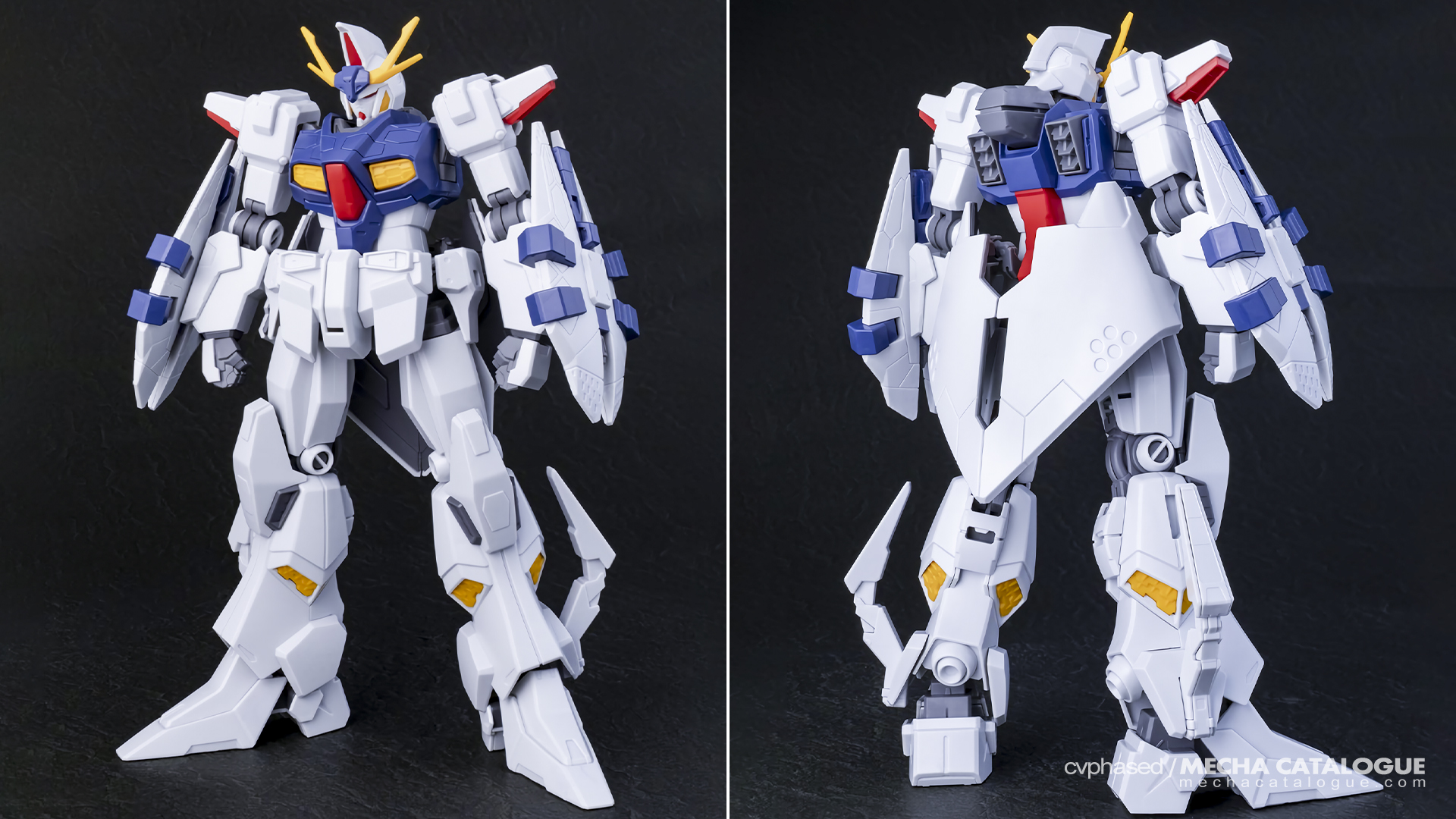 Finally, we have a better look of how the Odysseus Gundam will look once the Fixed Flight Unit is taken off, and revealing a couple of things. It shows us the much simpler torso unit which invokes a typical tri-colored Gundam. It also appears to have a large rear armor which has gray inner details. Both the elbow and knee joints appear to have minus molds at the sides and we don’t need to paint the internals. Finally, the feet is mostly white which means the red feet in the combined form is also from the Fixed Flight unit.

Overall this looks like a busy, complicated, but enjoyable build. The Penelope is one of those designs that many wanted in kit form and only had several official figure releases. There was a third-party kit from Model Comprehend which I’m also planning to build someday, but it’s always better if there’s an official release. Sans the articulation and accessories, this is a good basic look at the HGUC Penelope. It also gives you an idea of how the eventual HGUC Xi Gundam would turn out.